We use cookies to provide you with a better experience. By continuing to browse the site you are agreeing to our use of cookies in accordance with our Cookie Policy.
Skip To Content
Home » Grilling, boils and bakes: best ways for retailers to market seafood this summer

Grilling, boils and bakes: best ways for retailers to market seafood this summer

Despite a drop in fresh seafood sales due to inflation in recent months, grocers are banking on shoppers’ love for grilling, boils and bakes to boost seafood sales this summer.

Grilling is a huge seafood sales opportunity, as people grill 9.2 times per month on average during grilling season, according to the National Cattleman’s Beef Association. In addition, 71% of consumers plan to grill or cook meals outdoor as much or more this summer versus last, according to IRI.

“It is very important for seafood to get in on grilling,” said 210 Analytics Principal Anne-Marie Roerink, since it is traditionally very meat-centered. “The thing about special occasions and meals — which grilling is very much part of — is that people are willing to splurge a little more. They’re a little more willing to make that purchase that is more expensive than they had planned or would normally pay for, because that’s the food they want to serve to their guests.”

Wild California, Copper River, and Alaskan salmon is hot for promotions starting in May and running throughout the summer, while supermarkets are featuring a multitude of other fish and shellfish for summer gatherings. 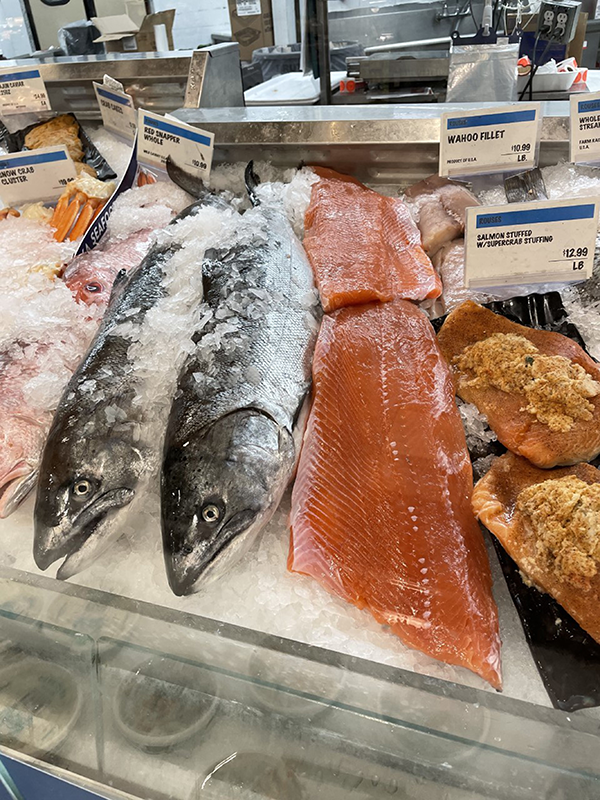 Higher prices on farmed and wild salmon this year could impact summer salmon sales, but the fish is still in high demand.

At the start of this year’s Copper River salmon season in May, customers were shelling out record amounts — around $200 for whole sockeye — for the fish in pre-orders, per My Northwest.

“It’s very challenging [for wild and farmed salmon]. The costs are so high,” said Denise Englade, director of seafood for Rouses Markets in Shriver, La. “Chilean salmon retail is what wild salmon used to be.” However, the regional chain “still tries to work with our suppliers negotiate a quarterly best price and promote it.”

Instead of being first to market at the start of the Copper River reason, “when it settles, we play in the market,” Englade said.

Rouses utilizes social media so it can react more quickly on wild pricing than for print circulars. “It seems to be working well for us, and allows us to be able to react to situations. In the paper ad, you have got to be so careful so are not overpriced or underpriced and losing money,” according to Englade.

Social media and email blasts, along with in-store materials, also work best for Encino, Calif.-based Gelson’s Market “because of the volatile fresh catch and availability on the wild caught salmon seasons,” noted Sean Saenz, senior director of meat and seafood at Gelson’s.

“Our marketing department is the best when it comes to getting the word out quickly to our customers about the ‘first of the season’ catch,” Saenz said. And the wild salmon season is “one of our favorite times of the year.”

“We will start with the fresh wild caught California king salmon in the middle of May, then Copper River, moving to Alaskan king and finish the wild-caught season with the coho, running through the end of September or early October,” Saenz said.

Top fish and shellfish to promote this summer

While salmon gets a lot of attention, grocers know that there are many other types of fish and shellfish ideal for grilling and boils.

Rouses offers boiled shrimp, crab, and crawfish year-round, but will step up crawfish promotions leading up to the fourth of July.

“As hot as it is here, it I nice to have it cooked here for you,” Englade said.

Bacon wrapped shrimp and scallops are popular in the summer, along with shrimp, tuna, swordfish and salmon kabobs at its stores. 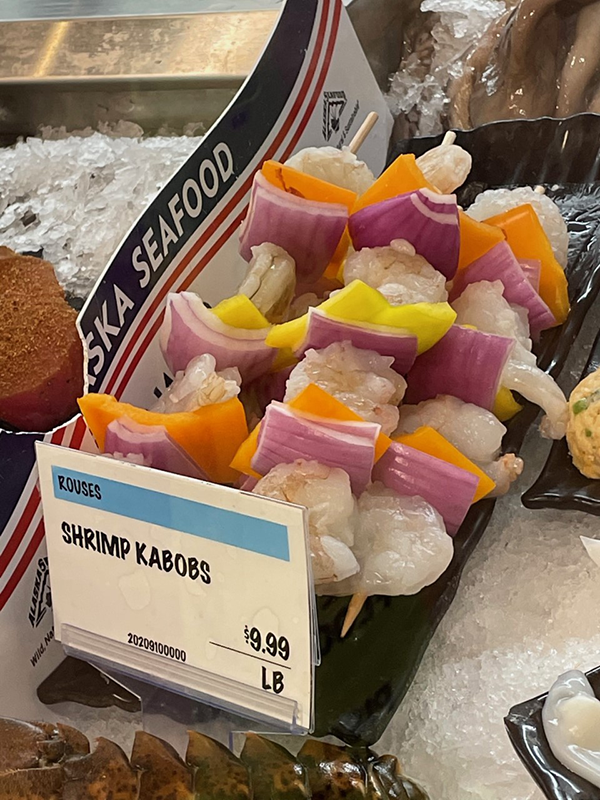 “We ask stores to have at least two varieties of kabobs in the full-service case for customers to choose from,” Englade said.

“It’s ideal when we can get some of those fish, with the suggestion to roast it whole on the grill,” Englade said.

Charbroiled oysters are also popular in the summer, but the local Gulf of Mexico oysters have been greatly impacted due to hurricanes and storms, Englade noted. Still, Rouses is selling some oysters in mini bags and pairs them with Drago’s Butter Garlic Charbroiling sauce, so customers think of them for grilling.

During the summer months, Gelson’s expands its grilling value-added offerings behind the glass in its gourmet seafood cases as well as its self-service grab and go section. Offerings include shrimp skewers, plain and marinated kabobs, and Salmon Lollypops, drizzled with three different grilling sauces.

“We also have a following for our swordfish, which is also popular for customers to grill,” Saenz said.

Publix focuses on featuring specific seafood items, rather than providing an overall grilling theme. For example, if its focus is Alaskan seafood, “we would potentially use halibut or sockeye as the hero item and include a grilling recipe,” said Guy Pizzuti, business development director of seafood at Publix. “If our focus is on domestic seafood, we may feature shrimp or lobster tails and show both in a grilling plate shot.”

During the grilling season, Publix promotes "meatier" fish such as halibut, swordfish, and tuna, along with larger count shrimp, scallops, and lobster tails.

Roerink has seen retailers remind shoppers with signage that shrimp is great for making kabobs, or offering shrimp or salmon kabobs ready to go.

However, it would also be beneficial for retailers to teach customers how to prepare some of the other species on the grill “without it falling apart on you and half disappearing into the flames,” Roerink said.