We use cookies to provide you with a better experience. By continuing to browse the site you are agreeing to our use of cookies in accordance with our Cookie Policy.
Skip To Content
Home » Premium flatbreads are becoming a new staple in consumers' pantries

Premium flatbreads are becoming a new staple in consumers' pantries

In the COVID era, stay-at-home chefs turned to new foods in attempts to shake up their breakfast, lunch and dinner routines.

One of the beneficiaries were flatbreads sold in the grocery perimeter. And even as people start venturing back into restaurants, many of those at-home behaviors remain, including making sandwiches, pizzas and a host of other dishes with premium flatbreads.

During the pandemic, flatbread sales made a dramatic shift from restaurants to grocery deli/prepared for Paterson, N.J.-based Kontos Foods, said Warren Stoll, the company’s marketing director.

“People still have to eat, and the popularity of flatbreads was still there,” he said. “Everybody made changes.”

In a move that could increase visibility for flatbreads across all channels, some restaurants turned into mini-retailers during COVID to make up for last dine-in business, Stoll said. A Greek restaurant near Kontos’ office, for instance, sold packaged flatbreads customers could take home in addition to their take-out meal.

Even with the pandemic, Kontos has not stopped innovating. Stoll’s description of the Kontos product line used to include the phrase “over 60” when referring to number of SKUs.

“It’s probably over 70 now if I stopped and counted,” he said.

The company rolled out the first flavored variety — garlic — in its Greek Lifestyle brand of flatbreads, which have fewer carbs (about half) and more protein (about double) than typical flatbreads. The new product hit shelves this spring.

The higher-protein product is aimed at aligning with the popular Mediterranean diet, Stoll said. Greek Lifestyle breads also have less sugar and fewer calories than other flatbreads.

Kontos also launched its Rustics Collection, an oval-shaped naan flatbread that comes in a two-count resealable packs in two flavors, tandoori naan, tandoori garlic naan and pizza crust. The breads are baked on the sides of tandoori ovens, which gives them their unique shape. 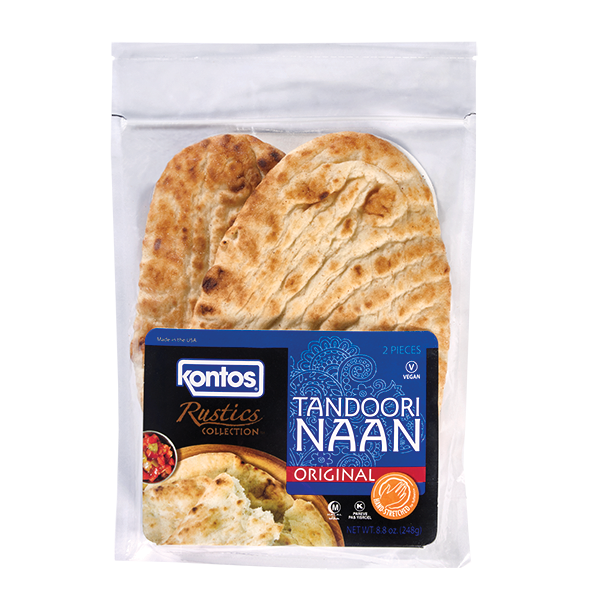 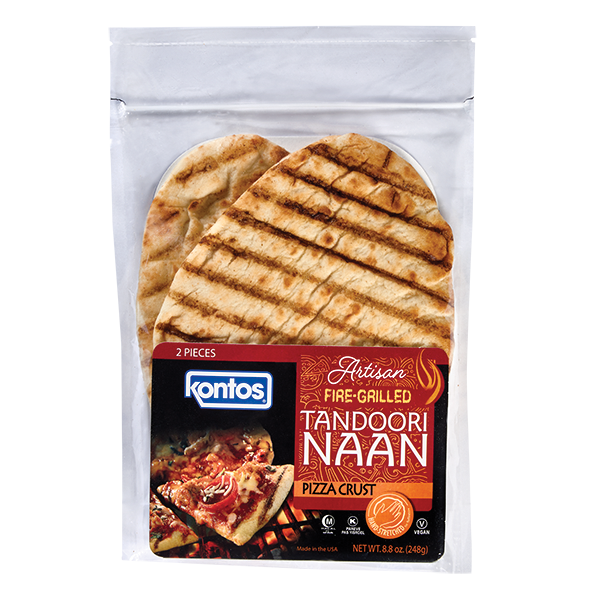 Rustics breads have an “artisan appearance” and are predominantly for retail, Stoll said.

Going forward, Stoll said many of the behaviors consumers adopted during the pandemic will continue, which should be good news for purveyors of premium flatbreads.

“One of the things we saw in the pandemic was that people were stuck at home, eventually boredom sets in and they got creative,” he said. “We saw an uptick in what we sell with pizza crusts, and also real creative stuff.”

That included things like baking flatbreads until they’re crisp, then breaking them apart into homemade pita chips.

Many of those culinary adventures have been curtailed as restaurants have reopened, but there are still plenty of people who continue to enjoy the new skills they picked up during all that time at home.

“People remembered what they did, and they seek to do again, just not at the same pace,” Stoll said.