We use cookies to provide you with a better experience. By continuing to browse the site you are agreeing to our use of cookies in accordance with our Cookie Policy.
Home » No-melt cheeses grill-ready

Grill-ready refrigerated display cases are more dynamic this barbecue season, as there are many varied non-meat offerings being merchandised alongside hamburgers, brats and kabobs. In addition to the growing number of plant-based alternatives and veggie burgers, there’s the emerging segment of grilling cheeses, which are designed to appeal to protein-seeking shoppers who crave flavor, variety and simple, wholesome nutrition.

“Cheese has served as an important protein source for centuries, even going by the term ‘white meat’ in feudal Europe, where it supplied essential nutrients to those who could not afford meat,” said Gianaclis Caldwell, founder of Gia’s Cheesorizo, Rogue River, Ore. “Non-melting, grillable cheeses are not only delicious, but offer nutrition and flavor that can enhance any omnivore’s menu. From Indian paneer to Greek halloumi, cooking cheeses have a long tradition that I believe is at a dawn of rediscovery for anyone who loves food and especially, of course, cheese.”

No-melt cheeses are not new, and in a number of countries they are part of traditional cuisine. They are fresh, semi-firm made with cow’s, goat’s or sheep’s milk, alone or as a blend. The reason these cheeses don’t melt is due to their protein structure, with moisture, salt, fat, age and acidity all having an impact.

They are vegetarian friendly. Like other cheeses, milk is the number-one ingredient. 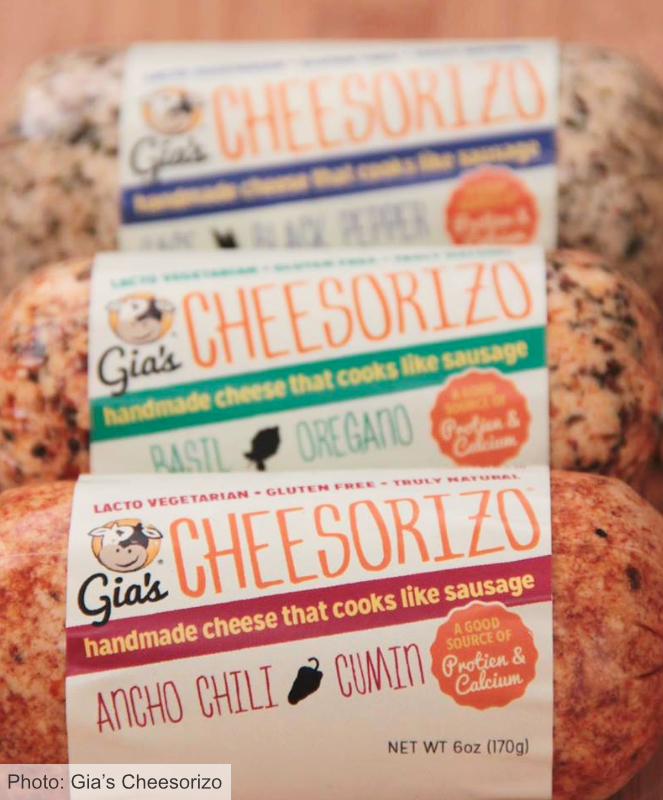 “Our inspiration for Gia’s Cheesorizo is classic Indian paneer,” said Ms. Caldwell. “This naturally non-melting, high-protein cheese is a staple in many Indian dishes. Whole milk is curdled using real apple cider vinegar (most commercial paneer is made with white vinegar or citric acid) when the milk is very hot. The resulting curd is drained and pressed. Because of the high heat at which it was coagulated, it can never melt.”

“Our cheese sausage is made by chopping up the curd blocks, then mixing in our carefully crafted spice blends and finally running the product through a sausage stuffer and into chubs,” she said.

In 2018 the company premiered CheeseSteaks. They are made with the same curd, but after pressing, the blocks are cooled, sliced and then basted with virgin olive oil, lightly grilled and dusted with sea salt. Varieties are ginger teriyaki, plain and Southern barbecue.

“The brand has a loyal following with vegetarian and omnivore eaters,” said Ms. Caldwell. “The recent trend toward whole dairy and low-carb eating has positively affected sales, and there has been eager interest from larger chains and food service buyers’ clubs for private labeling.”

The company recently stopped production in its small facility. It is seeking a partner to grow the business to take its on-trend products to the next level as interest in the category grows. 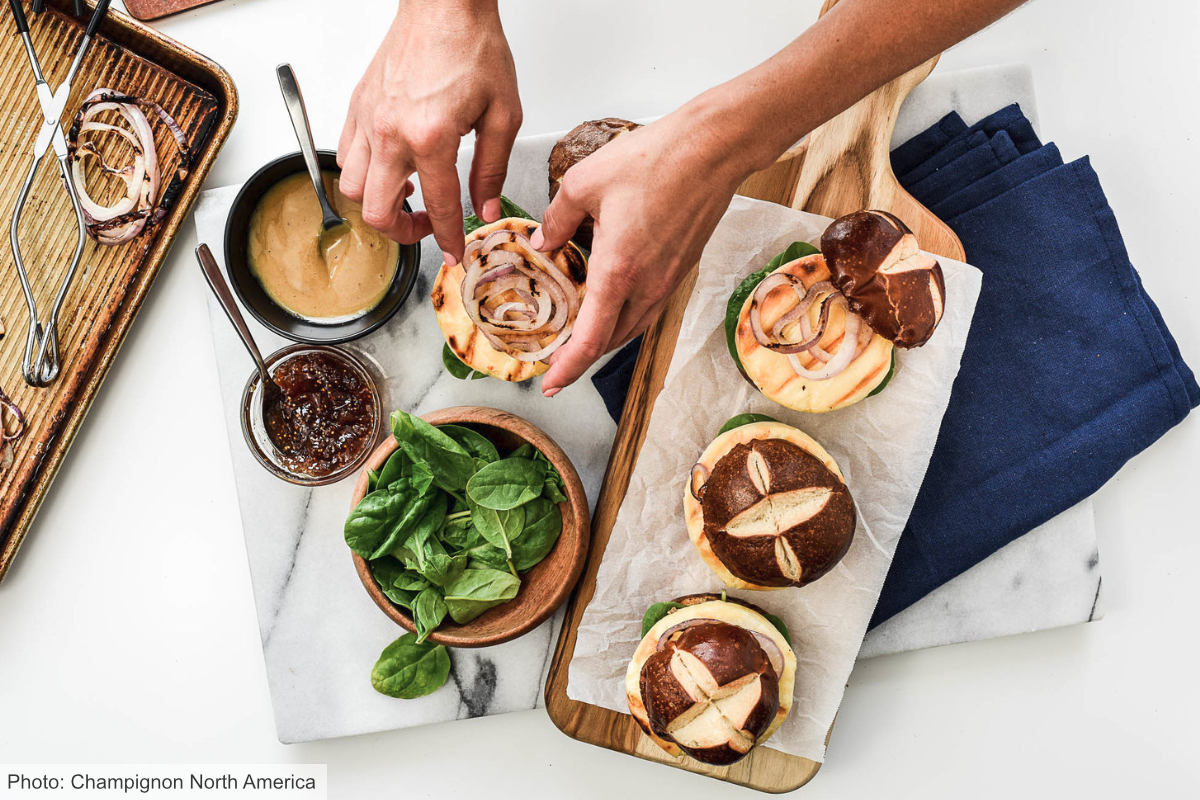 “Now grill masters and cheese lovers alike can enjoy specialty cheeses in a totally new way,” said Flynne Wiley, chief executive officer of Champignon North America. “With a change in diet trends, consumers are seeking out sources of high-quality protein and wholesome fat. These cheeses are elevating the barbecue experience.”

The brand is making its debut in two formats. The mild and creamy grilling cheese is designed to be heated directly on the grill, just like a burger. It develops a chargrilled, golden crispy outside and a warm and creamy soft inside. The marinated grilling cheese is a savory and creamy semi-soft cheese pre-marinated in herbs and oil and comes in a convenient aluminum pan for easy preparation and grilling. The cheese softens when warmed.

Ms. Wiley explained that in the past few years, halloumi cheese has really gained traction in the United Kingdom, where it’s available in many formats and flavors. The Rougette Bonfire Grilling Cheeses are not halloumi, which in the U.S. is registered as a protected product and must be made in Cyprus, Greece. The Rougette cheeses are made in Germany and are a little softer and less salty than halloumi.

Halloumi has been available in the U.S. for a long time; however, it never really caught on in the mainstream marketplace, according to Vas Pittas, c.e.o. of Agora Distributors, New York, who, along with his business partners, developed the Grillies product line for the U.S. market.

“Our Grillies Halloumi is all natural, made in Cyprus with no artificial flavors, additives or preservatives,” he said. “It contains high-quality protein from milk and is an excellent source of calcium and vitamin D.” 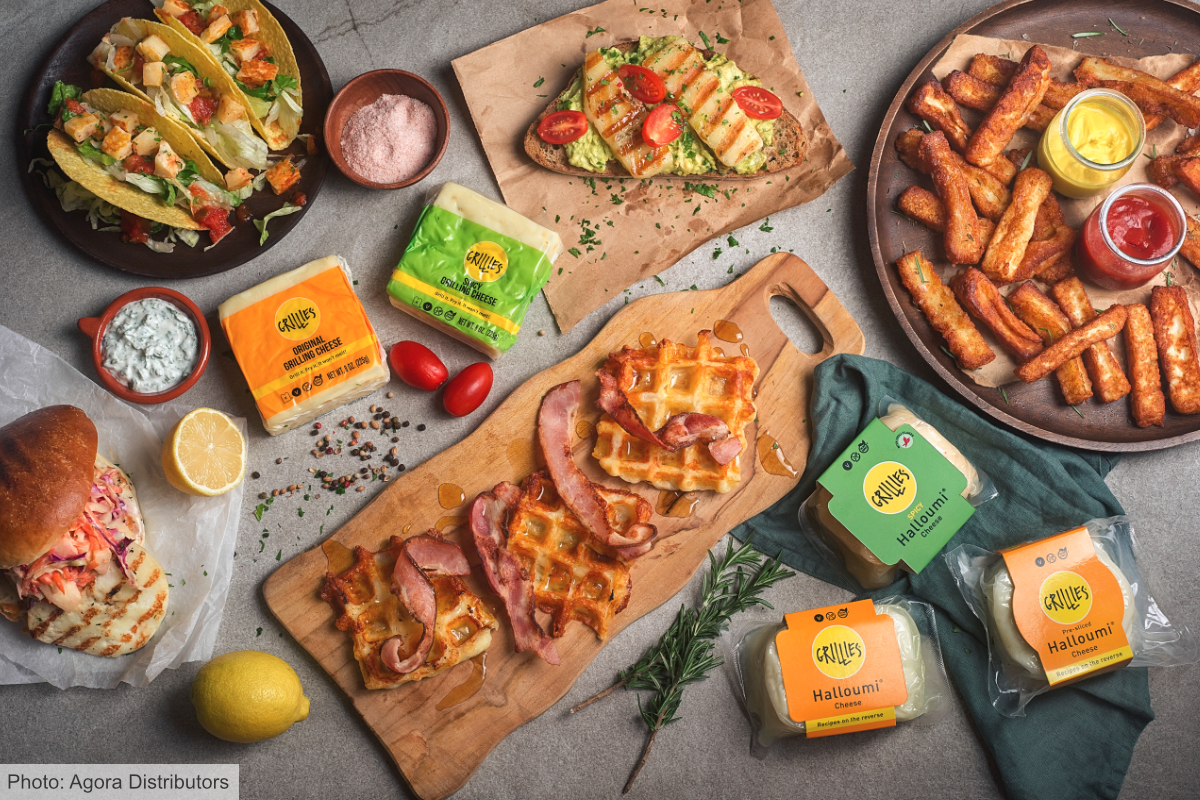 “The newest additions to the Grillies product line are an American adaptation of traditional halloumi,” said Mr. Pittas. “They are made in California from 100% cow’s milk with no artificial additives or preservatives. Once grilled, the cheeses form a golden crust with a warm, gooey center. By comparison, our domestic cheeses are lower in salt and milder in flavor than halloumi.”

The cheeses come in original and spicy varieties, with the latter containing jalapeño peppers. The product has found great success this past year in meal kits and will now be available retail for the summer grilling season.

“Consumers are shifting away from grilling meat products,” said Mr. Pittas. “These cheeses are made with simple ingredients that consumers understand and deliver the high-quality protein consumers are looking for.”