We use cookies to provide you with a better experience. By continuing to browse the site you are agreeing to our use of cookies in accordance with our Cookie Policy.
Home » Perimeter sales week of April 19 rival Easter 2019

“We knew it was going to be hard to beat prior year Easter numbers,” said Jeremy Johnson, vice president of education for IDDBA. “While no longer showing double digits, it is encouraging that the elevated everyday demand generated continued gains. Now, we have to challenge ourselves to provide solutions to help drive deli and bakery sales and build impulse sales in new ways and within a new reality, including online ordering, trip pressure and a desire among shoppers to minimize time spent instore.”

Within the dairy category, eggs (up 24.6%), natural cheese (up 22.1%) and processed cheese (up 22%) were the top sales items. Overall, results are still mixed within the deli category. Deli cheese was up 5.2% and deli meat was up 0.8%. The biggest impact on the category is still plummeting sales for deli-prepared foods (down 43%), a category that many grocers have closed out in response to COVID-19.

“Deli-prepared remained a hard-hit area,” said Eric Richard, industry relations coordinator with IDDBA. “At the same time, the soup aisle and frozen meals continued to increase double digits. Making sure that deli prepared offerings, whether pre-packaged or made-to-order, are on the radar is crucial and now more than ever. As is, we know that consumers who are out of time or not in the mood to cook often choose restaurants over deli prepared. Remind online shoppers about rotisserie chicken for tonight’s dinner or a holiday meal solution for Mother's Day in two weeks to recapture the spotlight.”

As many retailers have closed or reduced instore bakery offerings, fresh bakery sales have also taken a hit, with functional products performing better than indulgent ones.

For sales reports on individual items within the dairy, deli and bakery categories, view the full report here. 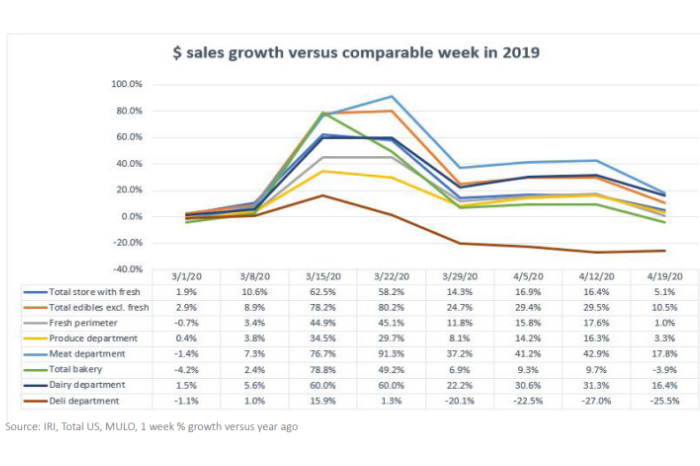