Traceability and transparency across the food industry has grown increasingly important in the past decade. In addition to general dietary shifts, consumers in a 2020 world are demanding that the foods they eat—whether that be meat, seafood or plant foods—are produced sustainably and with transparency throughout the supply chain.

For seafood, this means consumers are seeking information beyond simple source claims, and more like stories of the fishermen, producers and others along the path from sea to supermarket. In Alaska, for example, the seafood industry is the state’s largest private employer and many harvesters and processors are generations-old family operations, so those stories are easy to come by.

“The key to establishing a strong traceability program is committing to tell the stories of those involved, starting with the very fishermen who pulled in the catch,” said Megan Rider, domestic marketing director for the Juneau-based Alaska Seafood Marketing Institute (ASMI). “To demonstrate true transparency and traceability, retailers should have a sense of who and what is involved at every step of the supply chain, rather than just the most recent step before seafood arrives to its final point-of-sale location.”

“It’s all imperative,” he said. “Good knowledge of the complex linkages in supply chains, backed up by third-party certifications like BAP for farmed seafood that mandate traceability is important.”

“We work with a trusted network of family farmers and fisherman to provide a really clean and nutritious product for families and all kinds of consumers,” she said. “For us, we really look to partner with folks who not only share our sustainable mission but also are able to provide real transparency and traceability.”

For example, by working with family farmers who catch salmon, Blue Circle Foods can trace back exactly how a product came to them and eventually on to the shelf.

“We have full control of not only where it’s sourced and how it’s sourced, but also the processing all the way through to the end consumer,” Damato says. “We work with fisherman in the Maldives, so not only is our product fair trade, but we’re able to trace back the vessel to the actual tuna that the portion came from. The Maldives has an unbelievable traceability program.”

Earlier this year, the Global Dialogue on Seafood Traceability—created seven years ago to discover ways to improve traceability in seafood—released a set of basic technical standards to allow for interoperability across seafood traceability platforms.

A spokesperson for the group notes this was done to allow global seafood traceability more reliability and affordability for companies throughout the supply chain.

In support of the idea, companies such as Whole Foods Market, The Fishin’ Co., Sainsbury’s, New England Seafood and Orca Bay signed a letter stressing the importance of these voluntary standards.

“Voluntary industry standards for traceability are urgently needed to help companies ensure that the products they buy and sell come from sources that are legal, sustainable and ethical,” the letter said. “Technologies and systems already exist that make it possible to trace seafood products from ‘boat to plate,’ but they employ dozens (or even hundreds) of different approaches that prevent systems from exchanging data efficiently. That is why our companies are helping lead the GDST, bringing together more than five dozen companies from around the world and across seafood supply chains to create the first-ever global standards for seafood traceability.”

Additionally, the letter explained how the GDST standards would help companies do better business by defining the key data elements that should accompany seafood products as they move through supply chains, as well as design specifications that allow for seamless sharing of digital information.

“Once broadly implemented across the industry, these standards will facilitate trade and greatly increase the returns on investment as we continue to modernize our traceability practices,” the letter said. “These global standards have the power to positively change how seafood is bought and sold around the world, and our companies are already starting to take action.”

Transparency and traceability in seafood have evolved quite a bit in recent years, as consumers have pushed supermarkets to make it more of a focus.

“They are demanding more transparency and traceability in all products, especially when it comes to the seafood sector,” Damato said. “This is why we, as well as many other seafood companies, have made it a prime focus on all that we do.”

Consumers are increasingly aware of how the food they eat affects their overall environmental impact, and for the majority of Americans who are aiming to eat less meat in the years ahead, sustainable seafood is a delicious and nutritious option.

“Gen Z shoppers in particular are more attuned to knowing where their food comes from, making wild, sustainable seafood from Alaska the top seafood choice for younger generations of shoppers,” Rider said. “When consumers seek out wild, sustainable seafood, a big concern is making sure everything from the source to the species they take home is actually what they’ve been sold on.”

According to Lee, some consumers worry about the authenticity and safety of food products because of food scares and general unease about the modern world.

“But mostly they want simplicity and for trusted brands and retailers to take care of the complexities on their behalf,” he said. “That goes a long way in easing any concerns.”

Damato said customers are also more savvy about traceability and more aware of what to look for, such as third-party certifications.

“That is one of the pillars of offering a really sustainable traceable product,” she said. “It really takes the supplier to fill that program, have full traceability and have their own systems in place. That means not only just providing ASC or MSC certified products, but a supplier needs to have a strong network and a good system in place to show how a product is coming onto the shelf.”

Supermarkets can play an important role in alleviating the traceability and transparency fears of consumers.

Rider noted an easy solution is simply calling out the origin so shoppers know exactly where the seafood comes from.

“Certain sources, like Alaska, are associated with quality and sustainability for consumers, so when consumers #AskForAlaska, they can trust they are purchasing wild, sustainable fish every time,” she said. “Retailers can go further by being transparent on what labels—like ‘sustainable’— mean, as well as providing stories behind the seafood. Consumers are better able to trust a claim like ‘wild’ if it’s accompanied by the story of the fishermen who made the catch, for example.”

Furthermore, Rider said, retailers can showcase the source and the story of seafood offerings accurately and prominently, both in daily offerings as well as in larger promotions highlighting seasonal species. 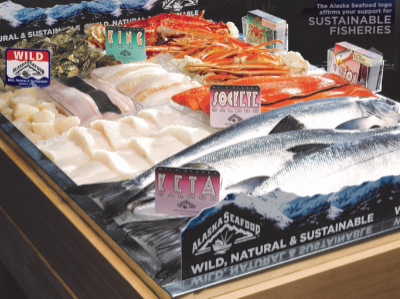 According to “Seafood Consumer of the Future,” a recent Technomic report, seafood spenders (tech-savvy consumers who make up 54% of the seafood spend) are 58% more likely to buy seafood when they see the Alaska Seafood logo. Rider noted this interest in origin extends beyond location, with more shoppers fascinated by the whole story of their seafood, including the fishermen who caught it.

“Sharing fishermen stories both on social media and instore can help captivate shoppers and increase sales,” she said. “ASMI works with retailers to tell the story behind the seafood they sell, including highlighting origin, quality and sustainability as differentiators that make seafood from Alaska some of the best in the world.”

Lee believes supermarkets should stick to honest messaging about the importance of safe, healthy food and the commitment of farmers to deliver just that.

“Avoid over-romanticizing the role of small producers to the detriment of bigger, industrial suppliers,” he said. “It’s often the bigger players that take the lead on improving food safety and environmental and social standards — big can be beautiful, too.”

Compared to traders that set up in the marketplace or a farmer’s market, supermarkets have a very different offering, a lot more responsibility and they are held to higher standards. Therefore, Lee said the best way to market traceability and transparency efforts is by doing what they do best.

“Supermarkets have an army of people dedicated to sourcing safe and responsibly produced food that customers are not aware of,” Lee said. “If I were a supermarket, I would run a story about a humble fish finger. Explain all the wondrous connections, people, places, products and processes involved. And then close by saying not to worry because it’s all been taken care of.”

Aside from leaning on certifications, Damato said supermarkets should be partnering with seafood companies who care about where a product is sourced from and establishing strong relationships so they can work together to get the word out about their traceability standards.

“We’ve been working with Whole Foods for a long time, and they really started bringing that focus to consumers early on and set the tempo for what a lot of other stores are doing today,” she said. “In some ways, it seems very simple, but it has been made very complicated because there are so many different players involved. Working with partners who share our same mission is key to a strong traceability program.”