Survey: More than one-third of Americans follow a specific diet

Diets such as paleo and Whole30 are gaining traction among Americans. The International Food Information Council Foundation’s 13th annual Food and Health Survey found 36% of Americans said they followed a specific eating pattern or diet within the past year.

The paleo diet focuses on items that cavemen ate, including meat, fish, nuts, leafy greens, vegetables and seeds. The Whole30 diet is similar in that it promotes the consumption of meat, poultry, fish, vegetables, fruits and nuts. People on the Whole30 diet go 30 days without consuming sugar or natural or artificial sweeteners; alcohol; grains; beans or legumes; soy; dairy; and processed additives. 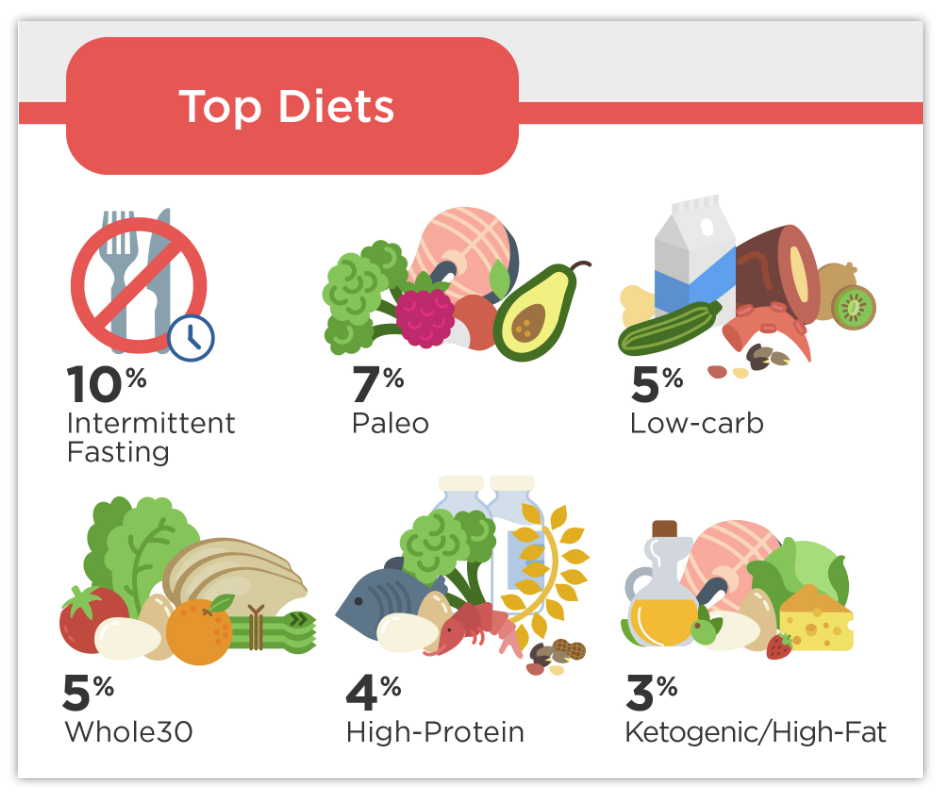 People age 18 to 34 are more likely to follow a specific diet or eating pattern, according to the IFIC online survey of 1,009 Americans ages 18-80 conducted March 12-26. More on the survey, which was released May 16, may be found here.

Many Americans are shunning sugar and carbohydrates, according to the survey, while others are seeking organic and natural options. Sugar was the most cited source of weight gain at 33% and was followed by carbohydrates at 25%, up from 20% in the 2017 survey. Seventy-seven per cent of respondents said they were trying to limit or avoid sugars in their diets.

People do perceive certain elements of grain-based foods as healthy. More than 80% of respondents listed both fiber and whole grains as healthy, trailing only vitamin D. More than 70% said protein from plant sources, which compared to just under 40% for animal protein.

The survey also found 20% ranked cardiovascular health as their top desired benefit. Other answers were weight loss and weight management at 18% and energy at 13%. Only 38% were able to name a food they would seek to help with their top health concern. Most frequently identified were protein at 10%, vegetables at 7%, vitamins and minerals at 5%, and fruit at 4%.

“This dietary disconnect – the inability to connect specific foods and nutrients to desired health outcomes – illustrates the need for stronger, cleaner, nutrition education based on the best available evidence,” said Joseph Clayton, chief executive officer of the IFIC Foundation.