SAN FRANCISCO – From the start of the coronavirus (COVID-19) pandemic in the United States, Placer Labs.ai, has been tracking which grocers have been performing well during these unprecedented times and analyzing what that could mean in the long run.

When COVID-19 first became a large concern in the United States in early March, most grocers across the country saw a huge peak in instore grocery visits resulting in significant year-over-year growth the second week of March.

After mid-March, Placer noted that differences between grocers began to show resulting from a combination of self-imposed restrictions and social distancing regulations which had a large impact on instore traffic. Most grocers began experiencing declines in instore traffic compared to the same timeframe last year, but some grocers have seen steeper declines than others. 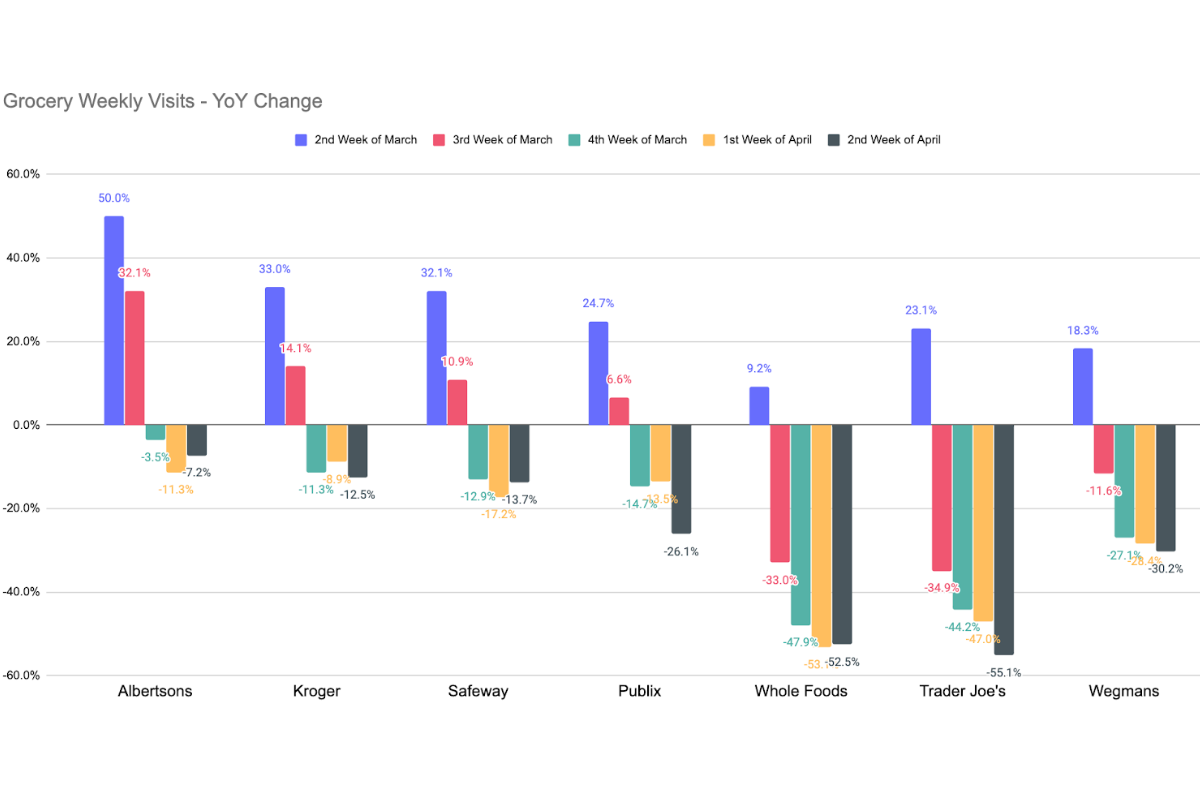 Placer pointed out that both Whole Foods and Trader Joe’s are heavily located in major cities on the coasts, which are among areas that have been hit the hardest from COVID-19 in the United States. But Ethan Chernofsky, Placer’s vice president of marketing, also thinks the steep declines are a result of the two retailers' approach to business.

“The combination of high prices and an orientation towards less frequent visits hurt both brands, with Trader Joe’s also being affected by its perception as a niche grocer – as opposed to a ‘one-stop-shop’ like a Publix or Wegmans,” Chernofsky said.

On the flip side, Kroger and Albertsons have had the most success during the COVID-19 period so far. While both companies have experienced a decrease in year-over-year instore traffic, the lowest they have dipped is 11.3% (Kroger) and 12% (Albertsons).

While Kroger and Albertsons have location distribution over areas that haven’t been hit as hard by COVID-19, Chernofsky noted that their performances rest on their traditional approach of an “old-school grocer” whose goal is serving as the core grocery for its local community.

“These factors not only position the brands to do well now but to perform well during the inevitable economic downturn to come that is likely to prioritize grocery shopping over eating out,” Chernofsky said.

In the middle, Placer pointed toward Wegmans and Publix as being hard hit, but well positioned. The first week of April instore traffic at Wegmans dipped below 28.4% year-over-year, and the next week saw a decline of 30.2%. Publix also experienced its worst week the second week of April, dropping 26.1% year-over-year.

Both stores suffer from the same geographical downfalls of Whole Foods and Trader Joe’s, with stores located in heavily COVID-19 impacted areas. Yet Chernofsky thinks the brands are better suited to move forward.

“The combination of high customer loyalty with a strong mix of value and high-end appeal positions both brands to perform well in the economic downturn as well,” said Chernofsky. “Even more, elements like Wegman’s Market Cafe could provide an added value during the coming months when families look to find cost-effective ways to eat.”

Chernofsky said that COVID-19 has opened opportunities for grocers to deepen the central role they play in their communities. He noted that ideas like selling ready-made meals from local restaurants or offering Blue Apron style products could provide a high margin and give customers a cost-effective ‘date night’ or substitute dinner out.

“Traditional grocers like Publix, Albertsons, Kroger and Wegmans are all benefitting from this wave, with the likelihood that they’ll benefit even more as the pandemic subsides,” Chernofsky said. “Yet, there are brands in this space who could face challenges. Whole Foods has an urban orientation and a perception as a high-priced grocer – both elements that could negatively impact visits even when a sense of normalcy returns.”

“In an industry doing better than most and positioned to do well during this period, there are different degrees to the potential success. How these brands orient themselves for the coming months may have a lot to say about who the leaders of the sector are in the years to come.”