We use cookies to provide you with a better experience. By continuing to browse the site you are agreeing to our use of cookies in accordance with our Cookie Policy.
Skip To Content
Home » Suppliers break down this year's tree fruit crop

A warmer than usual winter will likely yield early harvests, but tree fruit growers are still waiting to see how the weather patterns hold.

Suppliers of peaches, plums, nectarines and cherries break down their predictions for the season and recommend best practices for promoting tree fruit at retail.

David Stone, president and chief executive officer of Valhalla Sales & Marketing Inc., Kingsburg, Calif., which offers peaches, plums and nectarines, said the chilling hours in the area so far have been sufficient, with enough dormancy in the trees for a good set.

"Typically, we get most excited about warm weather in the spring because the eating quality of fruit will be phenomenal right from the start, as the warm ground will help produce the sugar in the fruit," he said.

Stone said he's also optimistic that the fruit volumes will be the same as last year, with spring thunderstorms spreading out excellent bloom. 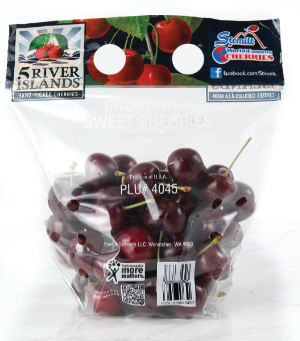 "I anticipate harvest earlier than last year with the warmer ground and 80-degree temps in February and March," he said, adding that a couple of cold nights won't be able to cool the ground down now.

"Our biggest concern is the lack of rain we received during the winter," he said. "We are having to start irrigating our fields earlier than we would like."

However, right now, there aren't any issues to report affecting the crop this upcoming season, Simonian said.

Brianna Shales, communications manager for Stemilt Growers LLC, Wenatchee, Washington, said that at the beginning of March, cherry blossom was underway in California.

"California had a mild winter and warmer-than-normal, plus dry, February," she said. "It’s still too early to know much about the crop since we have not moved into and then past full bloom. But early signs are promising for a California cherry crop to start in late April with promotable volumes in early/mid-May through Memorial Day if all goes well. Washington stone fruit, including cherries, have yet to bloom."

Jerry Frecon, a retired Rutgers University professor and horticultural consultant for the New Jersey Peach Promotion Council (NJPPC), said the New Jersey peach growing season is still young but the winter was great with no low-temperature injury and abundant rainfall.

"We are always concerned though with mild winters, when they may force our trees to de-harden or bloom early," he said. "We have not seen any bud or bloom loss yet. It looks like we're going to have an early flowering with earlier maturity, so I suspect will have good volumes of fruit from mid-June into September. Most of this fruit will be peaches and nectarines with a sprinkling of plums."

Frecon said freestone peaches will start in mid-July. He added that in addition to Mother Nature, there are other issues that are beyond growers' control that may affect pricing.

"Skilled labor is in short supply and with the increase in the minimum wage, this will be put extra stress on holding costs," he said. "There are always other costs that increase cost of goods like fertilizer, pesticides, equipment and regulations. The weather, particularly wet weather, could be a detriment to the control of fruit rotting diseases and costs."

Cherries start for Stemilt in late April in California and then transition to Washington in June, Shales said.

"We have the longest cherry season in the industry, starting in late April and running until Labor Day most years," she said. "Stemilt also grows organic apricots, peaches and nectarines as part of our Artisan Organics program. These stone fruit start in late July and run through September. It’s a great program to differentiate on because its organic."

Frecon of the NJPPC said the group will focus on promoting yellow-fleshed peaches and nectarines this season.

"We do have some new white-fleshed varieties: July Rose or August Rose from our New Jersey breeding program that will be available and increase our offerings of white-fleshed, sub-acid fruit for some customers," he said.

Valhalla Sales & Marketing will be promoting its apricot program heavily this year, said Stone. Featured will be the Weston variety of apricot, which the company has been experimenting with for about 10 years.

"The Weston has the same shipping and eating characteristics as a Patterson apricot, but is three times larger," he said. "Production on the Weston has increased the past handful of years and we should have plenty with availability starting in early June."

As for trends that should drive sales of tree fruit, Simonian of Simonian Fruit Co. said the usual suspects include healthy eating, dieting, juicing and organics.

"But it depends on the location, a store on the West Coast will have a different trend then a store in the Northeast," he said.

Shales of Stemilt said varieties aren’t called out on cherries like they are on apples or pears.

"However, Stemilt has modernized its varietal mix in both California and Washington in order to deliver on our promise of 'World Famous Fruit,'" she said.

"We are a leading producer of the up-and-coming Coral variety in California and have a great premium Lapin program called 5 River Islands to end the California season with incredible fruit," Shales said.

In Washington State, Stemilt has a similar premium program called Kyle's Pick that features Skeena cherries, which grow large in size and have great color and dessert flavor, she said.

Finally, Stemilt grows and markets Skylar Rae cherries, which are super-sweet cherries that are the third SKU in the cherry category.

"We utilized top-seal packaging in cherries out of Washington last year and expect to pack higher volumes of top-seal this year," Shales said. "It's a great scannable UPC pack that meets consumers' wishes to reduce the amount of plastic used in packaging." 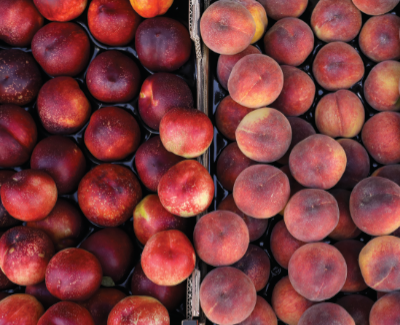 When tree fruit is on-ad, Simonian of Simonian Fruit Co. said multiple displays by the entrance of the store work well.

"If retailers can do a 99-cent-per-pound or a 10-for-10 promotion, this also seems to really increase sales," he said. "Sampling is another great idea to educate the customers about the product."

Promoting multiples types and colors (for example, plums can have three or four colors) next to each other seems to boost sales, Simonian said.

"Encourage customers to think of grilling summer fruit kabobs, jars and pectin for canning, baked goods like pie crusts for pies, salads to make summer fruit salads," he said. "These are things you can do throughout the summer to pique interest."

It's also important to note that tree fruit must be handled properly, Simonian said. "They ripen fast and bruise easily, so avoid stacking them if possible.”

"We need to see more medium-size peaches that can be offered at a lower price for all classes of buyers," Frecon added. "Cross-promoting works with other colors of fruit like purple and red plums, or other stone fruit or stone fruit products in cans, boxes or other units. Use good, clean, clear signage identifying the source of the product."

NJPPC's surveys have shown consumers want "local" or "Jersey Fresh" peaches, so most of its advertising is geared toward promoting those terms, he said.

"We have YouTube videos we offer on handling and merchandising New Jersey peaches," Frecon said. "We have these linked to our website and through the Jersey Fresh site. We love to see peaches promoted as Jersey Fresh or Local NJ peaches."

Finally, Shales of Stemilt said that when it comes to having a successful cherry season at retail, display space and size are paramount.

"It's important to stay in tune with the promotion opportunities in the crop, whether it's with early California cherries or the longer Washington season," she said. "Retailers that focus on the 4Ps (price, product, promotion, placement) do well with cherries. They truly are an impulse purchase, so focusing on fruit quality and freshness is a great way to earn cherry sales."