We use cookies to provide you with a better experience. By continuing to browse the site you are agreeing to our use of cookies in accordance with our Cookie Policy.
Home » Poke bowls tap into the fresh perimeter

A big reason? Poke bowls are affordable and trendy at the same time.

“Poke bowls prove to shoppers that they don’t have to go to an expensive restaurant to get the hottest culinary trends,” Wilde says. “That’s something that our retail partners are excited about — being able to grow their business by offering access to fresh, innovative meal options that are convenient for the shopper’s busy, on-the-go lifestyle.”

Products like Hissho poke bowls for grocery retail are tapping into the fact that supermarket prepared foods are the fastest growing sector of the foodservice industry, with sales exceeding $12.7 billion, according to Washington, D.C.-based FMI – The Food Industry Association.

“We want to maximize that growth by providing premium, more wholesome and customizable options that our customers are looking for,” Wilde says — and poke bowls fit the bill perfectly.

“We expect to see demand spike even higher this year, with the 2020 Summer Olympics set for Tokyo and Japanese influence expected to permeate further into the American culinary landscape,” she says.

First, as Rider points out, poke restaurants exploded across the U.S. Now, as so often happens, the trend is migrating to other channels — namely, grocery perimeter departments.

“In addition to gourmet and natural supermarkets leading the way with self-serve poke bars, the trend is moving out of the seafood department and into the mainstream deli, with retailers increasingly offering prepared poke among other fresh-prepared items,” she says.

Hissho poke bowls sold at grocery retail are hand-crafted daily by local chefs with high-quality, responsibly-sourced ingredients, Wilde says. Poke, he adds, has everything the company’s customers already love about their sushi, but now they’re thinking “outside the roll” and having it crafted into a satisfying and convenient bowl they can take on the go.

Choices galore (or just make our own)

Hissho currently offers five different poke bowls, which vary depending on the location. The company’s signature bowls include Classic Hawaiian Poke, Mango Salmon Poke and Blake Dragon Poke. Grocery shoppers can order a signature bowl or build their own right there in the deli section.

The demand among shoppers for wild and sustainably caught seafood is more prominent than ever across the industry, Rider says.

“Especially when it comes to preparations like poke, where quality is top-of-mind, specifying Alaska as the source helps communicate the message of quality and sustainability,” she adds. 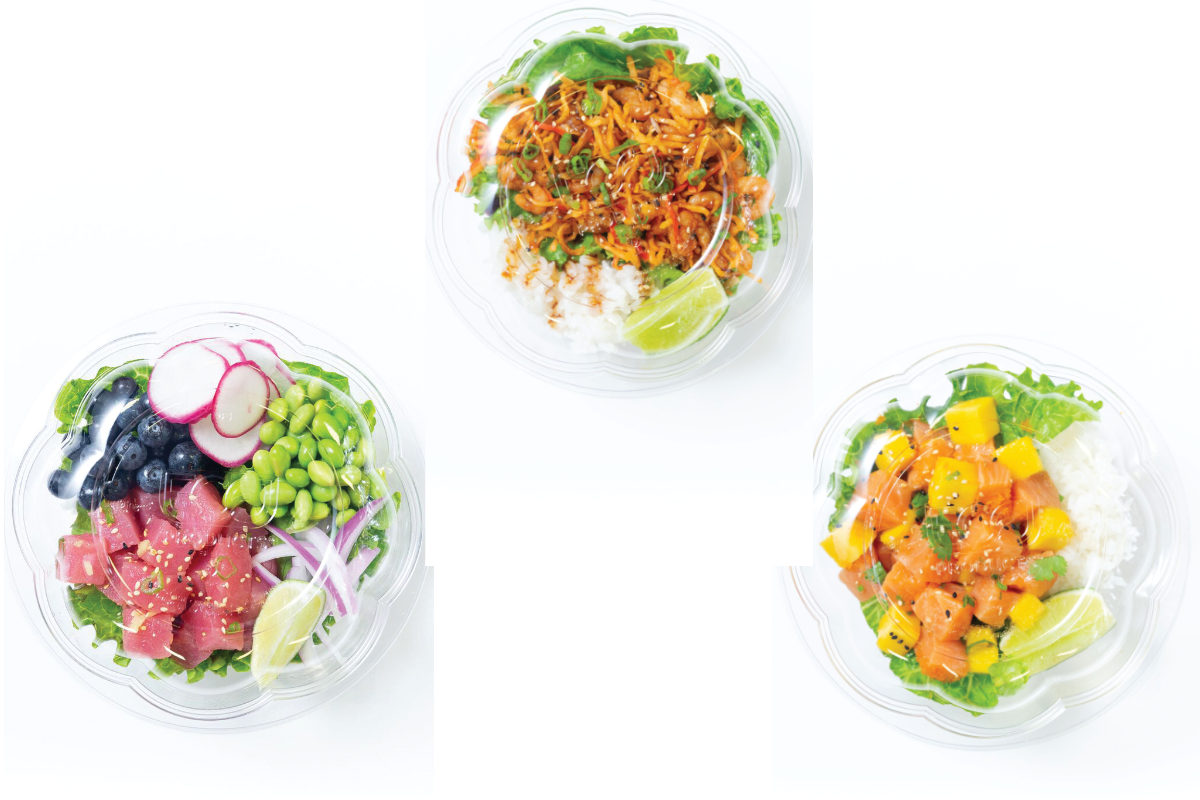 Gen Z shoppers in particular, a key audience for poke, are more attuned to knowing where their food comes from, making wild, sustainable seafood from Alaska the top choice for younger generations of poke shoppers.

There’s also, she adds, a prime opportunity for the evolution of poke bowls, featuring seafood along with grains and produce, from restaurants into the service deli.

“As a majority of Americans intend to eat less meat in the year ahead, seafood and plant-based staples like grains can work together to fill nutrient gaps and satisfy shoppers,” she says.

Asian flavors have also been trending over the past couple of years, with additional culinary influence in the U.S. expected this year as a result of the Summer 2020 Tokyo Olympics, Rider says.

“With the combined upward trajectory of poke bowls and the growing trend toward Asian flavors, our Tropical Poke Bowl, made with soy sauce, sesame oil and rice vinegar, remains one of the more popular recipes on our site,” she says. “Retailers interested in poke can access this recipe and others on the Alaska Seafood website, for sharing digitally or for re-creation as an in-store offering.”

Also on its site, ASMI has a flavor and ingredient guide retailers can use and/or share to create customized poke bowls starting with wild Alaska salmon or wild Alaska surimi.

Shoppers often value freshness when it comes to seafood, not realizing that most of the seafood in supermarkets and restaurants has been frozen at some point, which is important for ensuring quality and food safety, Rider says.

Alaska’s frozen-fresh practices, she says, in which fishermen often freeze their wild catch directly on the boat, locks in freshness and maintains quality.

“For home poke preparation from frozen, consumers can simply defrost fish in a covered, perforated pan overnight in the fridge before marinating for roughly 30 minutes before serving.”