We use cookies to provide you with a better experience. By continuing to browse the site you are agreeing to our use of cookies in accordance with our Cookie Policy.
Home » Case Study: Instore bakery food safety practices

By Andy Nelson and John Unrein

In the spring of that year, Dorothy Lane rolled out a cookie-dough product in its instore bakeries. Before taking the plunge, the retailer bent over backwards to alleviate any food safety concerns that are often associated with raw cookie dough.

“Obviously there are two concerns: E. coli with the flour, and salmonella with the eggs,” says Scott Fox, Dorothy Lane’s vice president of bakery operations. “So what we did is use heat-treated flour and we made it without eggs.”

For all practical purposes, Dorothy Lane’s instore cookie-dough product was probably as safe as anything else its bakeries sold. But with food safety, reality and perceived reality can get confused.

The evidence? Six to eight months after the product was introduced, Dorothy Lane discontinued it.

“I thought it was a pretty good product — unfortunately, it just did not take off with consumers enough that it was worth making it anymore,” Fox says. “I don’t know if consumers are more aware of E. coli and salmonella, if that’s why they’re not buying. It was trendy for a while, and we thought it would be a great item but it didn’t warrant making anymore.”

As of early 2020, Dorothy Lane has no plans to take another shot at a raw cookie dough product.

In general, however, it’s not raw product that raises red flags for Dorothy Lane’s instore bakeries when it comes to food safety, Fox says. The retailer’s top concern is allergens.

“If we have anything, and this one does pop up on a regular basis, it’s allergens,” Fox says. “That’s a big one that we’ve learned a lot about and are trying to get better at.”

More and more consumers are asking about allergens and, with new Food Safety Modernization Act (FSMA) regulations kicking in, retailers need to do everything they can to address them, Fox says.

FSMA hasn’t been a cake walk for Dorothy Lane’s instore bakeries, but the effort has been well worth it, Fox says.

“It’s been very difficult, but in all honesty, it’s only making us better,” he says. “Labeling is huge. We spend a lot of time to make sure that our labels are right.”

Dorothy Lane instore bakeries get most of their product from the retailer’s central bakery.

“We have to make sure it gets to stores safety,” Fox says. “But it starts with product development, getting it into our system, creating ingredient statements. Then it’s getting it on our GMPs, making sure the allergens are labeled and products are stored correctly.”

Record-keeping and establishing the correct protocols for cleaning are crucial, and Dorothy Lane has also started doing some swab testing at its central kitchen, Fox says.

“The other thing FSMA has made us do is to record lot codes, trace up and trace back, and we’re still in the development stages of that,” he adds. “We’re trying to get the big ones — allergen control, GMPs, tracking. Traceability is the big one.”

Dorothy Lane’s sister Killer Brownie company ships product all over the country, so in the past two years it has earned SQF Level 2 third-party certification, Fox says.

That SQF designated is displayed prominently on the Killer Brownie website, as are the potential allergens in each product.

Since not much product is made in the individual store bakeries, the food safety protocols don’t need to be as strict, Fox says. That said, Dorothy Lane has put all of its instore bakeries through a training program created by food safety specialist Alchemy.

Many retailers have made the adjustment to the “Age of Allergens” by selling more and more of their instore baked goods packaged and sourced from outside suppliers, Fox says.

That’s not the Dorothy Lane way. In fact, just the opposite.

“Out of our central bakery, we’re producing more from mix and scratch than we have ever,” he says. “Some of it comes to stores prepackaged — a lot of the coffee cakes, cinnamon rolls — but we also use transfer cabinets with fresh product for service cases.”

The service case remains a mainstay in Dorothy Lane instore bakeries. Those cases contain labels warning consumers of allergens, but product is not segregated. 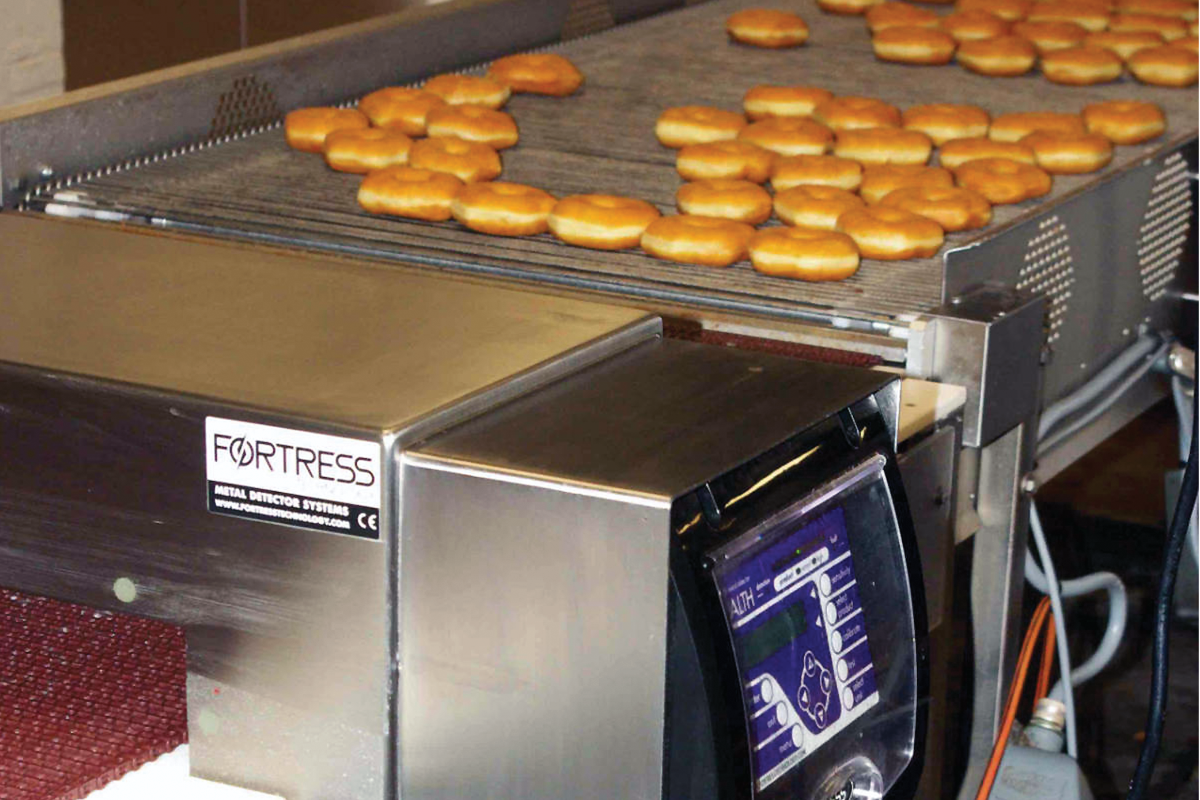 “We always strive for perfection in terms of efficiency, food safety and quality. We want to hit the highest industry standards and make sure we protect our customers and end-consumers with a safety program they are confident in. Metal detection adds another layer of failsafe protection,” says Jason Yada, national director of sales at Doughnut Peddler.

The company had always wanted to invest in metal detection, but needed a business justification for the investment. This rapid expansion provided the opportunity and the commercial case that Doughnut Peddler needed.

“We looked at various options and suppliers, gathered quotes and asked colleagues in the industry to share their experiences. We received positive feedback from everyone who had owned a Fortress unit. No one had anything negative to say about them,” recalls Doughnut Peddler’s Jon Dairman, senior operation manager, procurement.

Doughnut Peddler’s brief, in terms of what it wanted from its metal detectors, was straightforward. “Just to detect metal. We didn’t want any bells and whistles, just something reliable – I wanted it not to be an issue, to be able to set it and forget it,” Yada says.

From a metal detection perspective, though, the project wasn’t entirely straightforward. Donuts come out of the fryer and onto a 12-foot cooling conveyor made from high temperature belting. Doughnut Peddler wanted to mount the detectors at this point, as it provides the last opportunity to check the donuts before they are packed into plastic trays that sit in metal baskets. However, the combination of high temperatures and moisture creates a “product effect” that can confuse metal detection equipment, as it cannot discriminate between this and actual metal contamination. This can result in frequent false rejects being triggered.

With Doughnut Peddler’s lines running continuously at speeds of 160 donuts per minute, the company could not entertain the possibility of false rejects disrupting production.

Fortunately, Fortress’ Stealth metal detector was able to achieve reliable performance on this product, thanks to a combination of powerful digital signal processing technology – a technical platform which drives the detector, providing high-speed precision detection, and dual frequency operation – which facilitates automatic compensation for extreme product characteristics. Fortress contains all processing power on one board, versus multiple boards required on some competitive models, and one of the technical features of this is Fortress’ FM Software, which was created to enhance the detector’s performance and stability, especially in difficult applications.

These technical and mechanical features ensure that signals, due to mechanical, electrical, airborne and product, are nullified or eliminated.  This allows the detector to effectively identify signals created by the three types of metals Ferrous, Non-Ferrous and 300 Series Stainless Steel, overcoming the risk of false rejects.

Four full conveyor Stealth systems are installed on lines in the company’s North Carolina, Tennessee and Florida bakeries. As Doughnut Peddler continues to pursue an ambitious inter-state growth strategy, the ability to demonstrate this level of rigor is proving beneficial, according to Yada.

“We are already seeing that having enhanced product protection in place has the potential to unlock different customers. Some of the potential customers we are reaching out to are even more encouraged in working with us as they learn of our use of the robust metal detection HACCP plan we have in place.” he says.